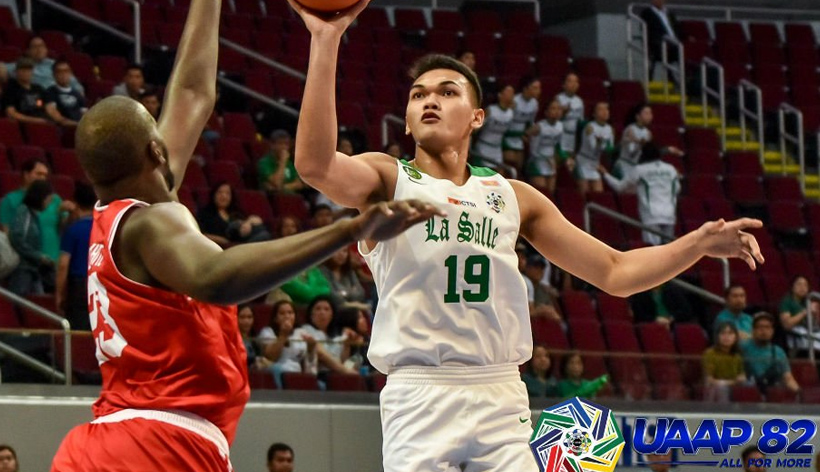 The Green Archers pounded the UE Red Warriors, 65-59, in the UAAP Season 82 men’s basketball tournament at the Mall of Asia Arena on Wednesday October 16.

La Salle clearly needed this win to bolster their Final Four bid, as they enter in a three-way logjam for the 3rd spot with FEU and UST with a record of 5-5.

The Taft-based squad still went out on a dogfight with the Red Warriors in all three quarters, even trailing by as much as four, 42-46, in the third canto.

Justine Baltazar put on a work in the late period and initiated La Salle’s 10-3 run to slowly break away against UE 57-52.

Rey Suerte and Alex Diakhite still stretched their deficit into a single point, but Jamie Malonzo provieed enough separation with his triple with 1:23 left.

From then on, Encho Serrano’s spin lay-up and Baltazar’s two free shots sealed the deal for La Salle.

The 6-foot-7 Baltazar willed La Salle with a double-double feat of 23 points and 12 rebounds.

“We’re happy that we were able to pull this one out. We really needed this one,” said La Salle head coach Gian Nazario.

Aside from Baltazar, Malonzo and Encho Serrano were the only three players who scored in the final frame of the matchup.

The Green Archers came out with a huge payback after suffering an agonizing 88-89 loss against UE in the first round.

For UE, they are currently on the verge of elimination with a record of 3-8.