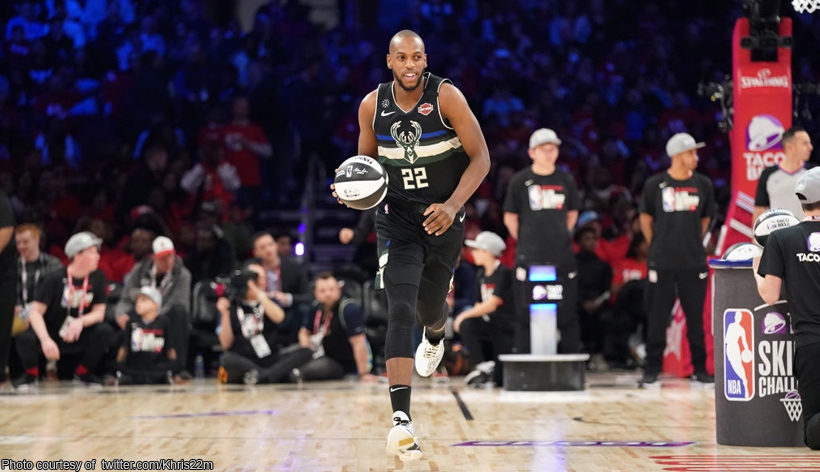 Bucks superstar Giannis Antetokounmpo fouled out and the Bucks, who led by as many as 20 points, were in trouble in Washington.

But Middleton, with key support from Eric Bledsoe and Robin Lopez, pulled out the victory.

For much of the night, it looked like the league-leading Bucks — who secured a playoff berth on Sunday to set a record for the earliest clinch in NBA history — would celebrate with a win.

But Beal scored 22 points in the fourth quarter as the Wizards rallied from a 15-point deficit.

When Antetokounmpo, limited by foul trouble throughout the second half, fouled out with 1:36 left in the fourth, the Bucks’ lead was just three points.

Beal knotted the score with a three-pointer, and after neither team could break the deadlock in regulation, the Wizards gained a four-point edge with less than two minutes remaining in overtime.

Middleton, who had missed six straight shots from late in the fourth, drew a foul and made both free throws. He drained a pull-up jumper to tie the score and with 31.2 seconds left, drained a three-pointer.

Beal made two free-throws, with Middleton then making two as well and the Bucks had the win after Troy Brown’s three-pointer at the buzzer failed to fall.

“I think we responded well,” Middleton said of the Bucks’ answer to Beal late in the game. “He was great, but we still found a way to make it tough for him there at the end.”

Beal, who scored 53 points against the Chicago Bulls on Sunday, became the first player since the late Lakers legend Kobe Bryant to score 50 points on back-to-back-nights.

Bryant scored 60 against Memphis and 50 against New Orleans on March 22-23, 2007 — the final two games of his historic four-game streak of 50 points or more.

While Bryant’s Lakers won all four of those games, Beal’s efforts went unrewarded in back-to-back defeats.

League-leading scorer James Harden piled up 37 points in the Rockets’ 123-112 victory over the New York Knicks.

Bryant, who died in a helicopter crash on January 26 that also claimed the lives of his daughter Gianna and seven others, was remembered in a moving “celebration of life” attended by some 20,000 people.

Bryant’s widow Vanessa spoke touchingly of their close relationship and family life, and NBA icon Michael Jordan wept as he recalled a player and friend he came to regard as his “little brother.”

– Embiid steps up –
In Philadelphia, Joel Embiid scored a career-high 49 points to lead the 76ers to a 129-112 victory over the Atlanta Hawks.

The Sixers improved to 27-2 at home, with Embiid’s performance a welcome lift for a team who were again without Aussie star Ben Simmons because of a lower-back injury.

With Simmons reportedly facing a significant absence — as the regular-season heads into the home stretch — Embiid stepped up.

Philadelphia were on fire out of the gate, leading by as many as 21 points in the first quarter.

Hawks star Trae Young drained a three-pointer as the third quarter ended that gave Atlanta a 92-91 lead going into the final frame.

Philadelphia responded by out-scoring the Hawks 38-20 in the final period, Al Horford’s layup with more than four minutes remaining capping a 10-2 scoring run that put the Sixers on the road to victory.

Embiid added 14 rebounds, three assists and three steals, delighting Philly fans with a celebratory dance after draining a three-pointer late in the game.

“With the news of Ben, he has to come out and play the way he did,” Philadelphia coach Brett Brown said of Embiid. “When he comes with that activity, that mentality, that energy, he makes a statistician work and we’re going to win a lot of games.”

The Cleveland Cavaliers escaped with a 125-119 overtime win against the Miami Heat, who wasted a 22-point third-quarter lead.

The Heat, holding down fourth place in the Eastern Conference, couldn’t hang on against a Cleveland team that owns the worst record in the East. The Cavs out-scored Miami 14-8 in overtime to complete the rally.