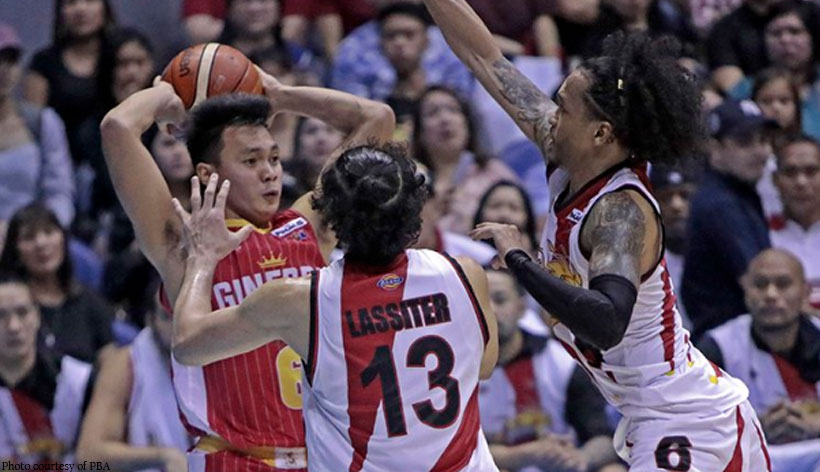 Barangay Ginebra’s Scottie Thompson tried to chase San Miguel Beermen’s Junemar Fajardo when the latter was already close to the basket, but he found himself at the wrong end of a poster dunk of sorts.

Thompson came up huge from there.

The six-foot-one guard made six straight points down the stretch to highlight the squad’s late rally to down the Beermen, 87-83, in Game 5 of the PBA Commissioner’s Cup Finals in front of 16,952 people at the Smart Araneta Coliseum in Quezon City on Sunday night.

Finally engaging in a down-the-wire battle after four straight games of either ending up at the right side or the wrong side of a rout, the Beermen, who actually led by as much as 12 points in the second quarter, found themselves scoreless since the Fajardo slam, and the Barangay rode on Thompson’s heroics coupled by huge baskets from Joe Devance and LA Tenorio to take a pivotal 3-2 lead in the best-of-seven series.

Off a timeout with 3:15 remaining, or right after Fajardo’s dunk on Thompson, Devance scored on a quick floater to cut SMB’s lead to three, 83-80.

However, both sides went exactly two minutes without a basket.

Ginebra finally got back on the scoring track when Thompson, who drew a hard foul from Fajardo, made two free throws to further trim the gap to one, 83-82, with 1:07 to play.

Renaldo Balkman then missed three straight close baskets, the last one being blocked by Greg Slaughter, but Junemar Fajardo collared the offensive rebound and fished a foul from Slaughter.

However, Fajardo, who was 3-for-3 in his prior trips to the free throw line, missed two crucial free throws, and Arwind Santos, who grabbed the offensive rebound, threw the ball to no one at the sideline, giving the Barangay a chance to take the lead.

Justin Brownlee then found Thompson open inside for the layup, and Ginebra finally went up, 84-83, with 36.9 seconds left.

Slaughter blocked Balkman once again, and Joe Devance found Thompson wide open again for another lay-in that stretched their team’s lead to three, 86-83, with 23.1 seconds to go.

SMB went for the gamble of going for a three-pointer, but Chris Ross and Arwind Santos misfired on their own tries even as Ross stepped on the sideline while going for the third serving. Tenorio iced the game with a split from the line with 2.9 seconds on the clock.

Thompson finished with 20 points, making 7-of-12 from the field, 11 rebounds, three assists, and one steal for the Barangay, who can close out the series on Wednesday as it shifts to the Mall of Asia Arena in Pasay City.

Brownlee, who went nearly flawless in the first four games of the series, struggled this time, missing all of his five three-point attempts and could only come up with 18 points, but he also had nine rebounds, four assists, one steal, and more importantly four blocks.

Balkman finished with 34 points for the Beermen, but he only made 14-of-34 from the field, missing his last six shots. (PNA)