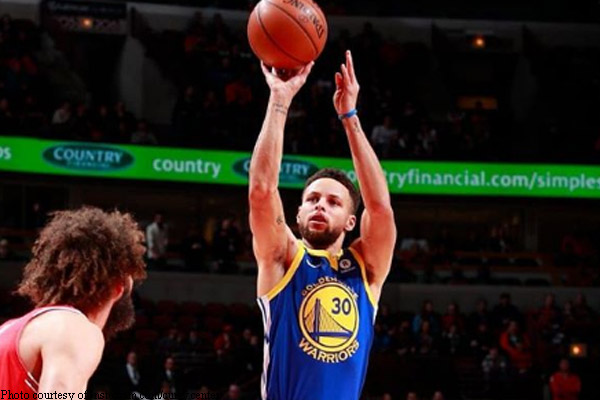 “Every night we come out it’s a different guy,” Thompson said.

The Warriors outscored Chicago 32-12 in the third quarter to pull away, the Bulls being led by reserve Nikola Mirotic’s 24 points.

Golden State improved to a league-best 37-9 and moved two road wins shy of matching the all-time NBA record away win streak of 16 games, set by the Los Angeles Lakers in the 1971-72 season as part of their overall record 33-game win streak.

“It’s not about records,” Durant said. “We just want to play good every day. We want to keep getting better, build better habits.”

The Warriors could set a club record with a 15th consecutive road victory on Saturday at Houston, could match the NBA road win streak record of 16 games on January 30 at Utah and possibly break that mark on February 2 at Sacramento.

“Winning on the road is great,” Curry said. “You see opposing arenas empty out pretty quick.”

But not all the news from Chicago was good for the Warriors. Rookie Jordan Bell was taken off in a wheelchair with what was later diagnosed as a sprained left ankle. X-rays were negative from more severe damage but a full diagnosis will not be made until an MRI exam Thursday.

Chicago’s Kris Dunn, averaging 13.6 points a game, chipped and dislocated two teeth with a face-first fall late in the fourth quarter. He was to undergo further evaluation Thursday.

Russell Westbook added 19 points, six rebounds and seven assists for the Thunder, who improved to 25-20.

“We need to just stay disciplined. That’s what makes us win games,” Adams said. “We’ve got to focus on what gets us in that spot in the first place.”

Adams, a 24-year-old 7-footer, says he has found the best way to support superstars Westbrook, Anthony and Paul George, who had 13 points, is to simply play his own game inside.

“It’s just finding ways you can help out the team,” Adams said. “You don’t have to be a stat guy. It will come back to you. These guys are great. The more you help them the more it comes back to you.”

Michael Kidd-Gilchrist had 21 points to lead seven double-figure scorers while Dwight Howard had 18 points and 15 rebounds in Charlotte’s 133-109 home win over Washington.

Australia’s Patty Mills had 25 points on 7-of-10 3-point shooting and Spaniard Pau Gasol had 13 points and 12 rebounds for the Spurs, who are without Kawhi Leonard indefinitely due to a quadriceps injury.

“LA (Aldridge) is the reason we have kept such a good record with Kawhi and Tony (Parker) out,” Spurs coach Gregg Popovich said. “We’d be in deep kimchi if he weren’t playing the way he is.”

Kent Bazemore’s jumper with 3.6 seconds remaining, the last of his team-high 20 points, gave Atlanta a 94-93 victory over visiting New Orleans.